"Estimated Charges" in Cerbo are prospective or future charges that can be added to a holding tank, and converted into regular charges if/ when appropriate. Estimated charges on a patient's account do not affect their account balance or appear on their account statement or in your end of day billing reports. If you are interested in having this feature enabled for you, contact us at support@cer.bo.

Estimated Charges can be renamed to a different name, like Package Charges, Future Charges, Prospective Charges, etc., if a different term is more applicable to your use case.

From within a patient's chart, you can add estimated charges:

Note: if you do not see the options to add to/ from Estimated Charges,, you will need to contact Cerbo support to have this feature enabled for your practice.

Use the search bar that appears to search for and add the estimated charge - or charge group - from your Charge List. 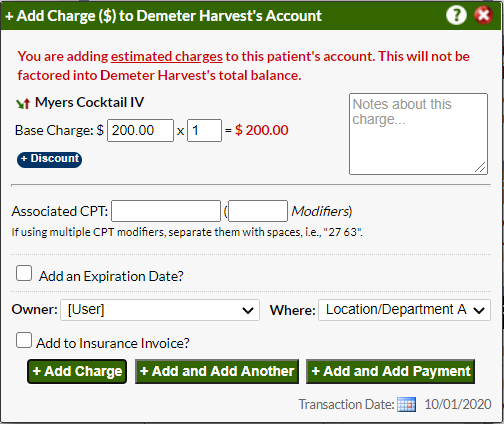 Estimated charges can have an expiration date, after which point they will remain in the patient's account but can no longer be converted to regular charges. The expiration date would be used, for example, for prepaid package charges that must be used or redeemed by a certain date.

The expiration date would be added by checking the "Add an Expiration Date" box in the Add Charge window, and specifying the date.

When that date passes, the estimated charge will appear in the patients Estimated Charges, shown at the bottom of their billing history, but will be struck through.

To see which estimated charges are soon to expire across all patients, go to Reporting > Financial Reports > Estimated Charges by Expiration.

By default, payments can only be applied to pay regular charges, not estimated charges. However there is an optional setting that will allow you to apply payments to estimated charges as well. This can be useful, for example to make amounts paid toward a prepaid package unavailable to apply toward other charges in the patient's account.

Once you have added an estimated charge, you can modify it from within the Encounter Note it was added in OR from the patient's expanded Billing Block. Simply click on the estimated charge to edit it or right-click to see more options:

When the prepaid service is redeemed, or when the patient OKs an estimated charge, you would use the Add to Patient's Account option to convert that estimated charge into a regular charge. That will show the regular Add Charge window, pre-populated with the charge details. Review the details, and click the button to add.

Move an Estimated Charge added Outside an Encounter Note

Select all the items you want to move, then click Manage Checked > Move to this Encounter Note.

There are two ways you can create a receipt of estimated charges and services.

Did you find it helpful? Yes No

Send feedback
Sorry we couldn't be helpful. Help us improve this article with your feedback.